You are here: Home1 / Ape Calessino

The History of the Piaggio Calessino

Anyone who does not know a Piaggio Ape Calessino today has never read a newspaper, never seen TV. Or he has never visited a city of art between the Italian and foreign ones. Or he is simply lying!

The Calessino Piaggio was born in 1948 from a rearrangement of the three-wheeler of the ancient Italian motor manufacturer. The idea was to transform the Tre Ruote into a mixed transport vehicle, taking its cue from the historic and inimitable motorcycle: the Vespa.

Therefore the name ‘Calessino’ derives from the model of a Piaggio Vespa which kept its appearance in the front, but to which the rear trim had been extended. Through the positioning of seats like benches, they recalled the gig pulled by pack animals, horses and donkeys, or mules.

Later the ‘Motorized Calesse’ was embellished with a fabric hood to protect itself from the sun or bad weather. Its design was born from the desire to create a comfortable means of transporting more people for short distances, but with very low costs and accessible to all. The boom of the new model of the Italian house was seen in the postwar period.

From means of transport to a cinematographic icon

At that time, tourists from many European and American countries used it above all for small trips to the Italian Islands, and to seaside resorts. From North to South and especially along the coasts and seaside towns, the use of the Calessino Ape extends throughout the national territory. In addition to its use in tourism, it becomes an icon of Italy also in the cinema. Do not forget his participation during the filming of the Dolce Vita, where he receives the worldwide consecration.

But the fame of the Piaggio Ape 50 does not stop there. By beating any prediction, it is also purchased across the border. It even arrives in Asian countries, where it will be known as ‘Tuk Tuk’. In India and Thailand it even becomes an emblem of the life of those distant countries, and it still is today.

The new Ape 200 version of the Moto-Calessino is presented as an idea reserved for an audience that prefers absolutely refined places and situations. Symbol of the costume of an elegant Italy, which avoids the exhausting rhythms of modern times and approaches knowledge, people and villages with grace and elegance. The hood opens and rewinds at the rear trunk to allow travelers to appreciate the landscape and walk the paths in the open air. The narrow dimensions allow a practical driving even in more complicated conditions. The agile and elastic engine is indispensable for struggling through the most uncomfortable corners. 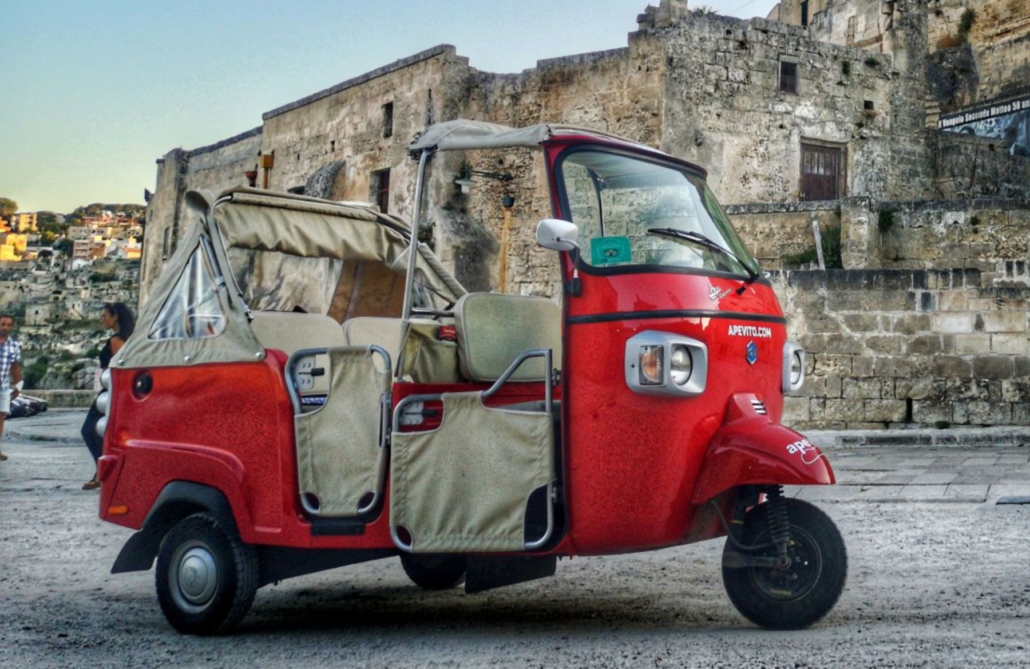 The Three Wheels Vintage Ape Vito is flaming red, with a cream-colored canopy and can carry up to five people. It has steel reinforced doors and shell, and is suitable for families and couples. The vehicle was slowly renovated making some functional changes while respecting the original structure and leaving the engine as it was. In reality, nothing important has been changed in the aesthetic and mechanical system. Only a vehicle that seemed to have been forgotten, but which today still manages to excite, was put back on the road. Once it happened for the famous VIPs and personalities around Portofino, Cannes, Forte dei Marmi, Capri, and the most beautiful Italian beaches. So today ape car continues to give different sensations from other motor vehicles.

If you want emotions and simplicity we are ready, let’s start the engines!

GUIDED TOURS IN APE CALESSINO ARE PRIVATE. IN CASE OF MORE THAN 4 PEOPLE MORE VEHICLES WILL BE USED

You can find out more about which cookies we are using or switch them off in settings.

This website uses cookies so that we can provide you with the best user experience possible. Cookie information is stored in your browser and performs functions such as recognising you when you return to our website and helping our team to understand which sections of the website you find most interesting and useful.

Strictly Necessary Cookie should be enabled at all times so that we can save your preferences for cookie settings.

If you disable this cookie, we will not be able to save your preferences. This means that every time you visit this website you will need to enable or disable cookies again.

This website uses Google Analytics to collect anonymous information such as the number of visitors to the site, and the most popular pages.

Please enable Strictly Necessary Cookies first so that we can save your preferences!